A very versatile CNC for wood, metal and laser milling, carving, and etching.

Although this was pretty much a basement build, this is one of largest projects, yet.  For this CNC build, we went after a laser, wood, and aluminum cutter/carver. Comparable units from reputable manufactures are over $2000. This one came in under $800. 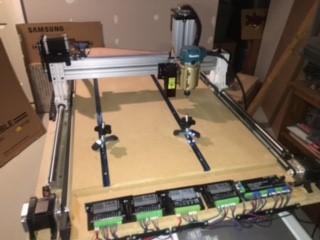 What makes it such a big project is that we didn't just assemble it or build it from a kit.  It was designed from the ground up in Autodesk Fusion 360.  This included a custom built Arduino Uno shield.  The biggest part is an entirely new offering to the CNC community to drive GRBL - The Raising Awesome Carver.  This took tons of research and code to make a cool 3D interface with plenty of smarts for wood and laser carving.

Also, you can check out the Raising Awesome Carver.

I'll be recording speed and power settings here as I learn:

Have a question?
Thanks for asking! Come back soon to see the response.
Back to Home